Out of the six wards in the city of Kent, ward four is mostly university-owned land, off-campus student housing and a few quiet neighborhoods. That doesn’t mean this ward hasn’t faced its share of issues throughout the years.

Councilman John Kuhar resides over ward four and has for the past 12 years. Throughout his time representing the area, he said he’s ran into little issues with constituents. 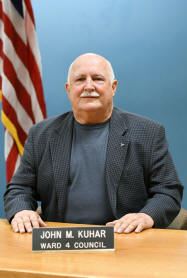 “Most of my work hasn’t really involved specifically ward four, as it does most of the city … Well, this would have been over the last 12 years,” he said. “We hear very few problems in this ward. There have been a few issues around the College Towers and sometimes noise complaints, but the loud parties have kind of come to a rest a little bit.”

Not much has changed within the ward throughout Kuhar’s tenure, with the exception of a few new apartment buildings and on-campus construction, most recently the completion of Design Innovation Hub in 2020.

Although Councilman Kuhar is not currently preoccupied with his constituents, he’s still busy working to improve the city of Kent. The city council is currently in the planning stages of building a city hall and a roundabout on Main Street.

“Well with the city hall, what we’ve done over a period of time is we’ve looked at different artists’ concepts. We’ve looked at the needs for the city hall to function, design and cost and tried to set parameters to go by, he said. When we started out looking at the first concept, it looked like it should be a prison or something. So we’ve enhanced it a little bit. Now, [we have to go back and cut costs].”

Councilman Kuhar mentioned residents in College Towers complaining early in his tenure, but what about now?

Built in 1968, College Towers is amongst the oldest apartment buildings in Kent, and it’s starting to show its age. The parking lot is littered with potholes and cracks. Some of them looked like they’d been cheaply filled, but the tar had been worn on the holes. 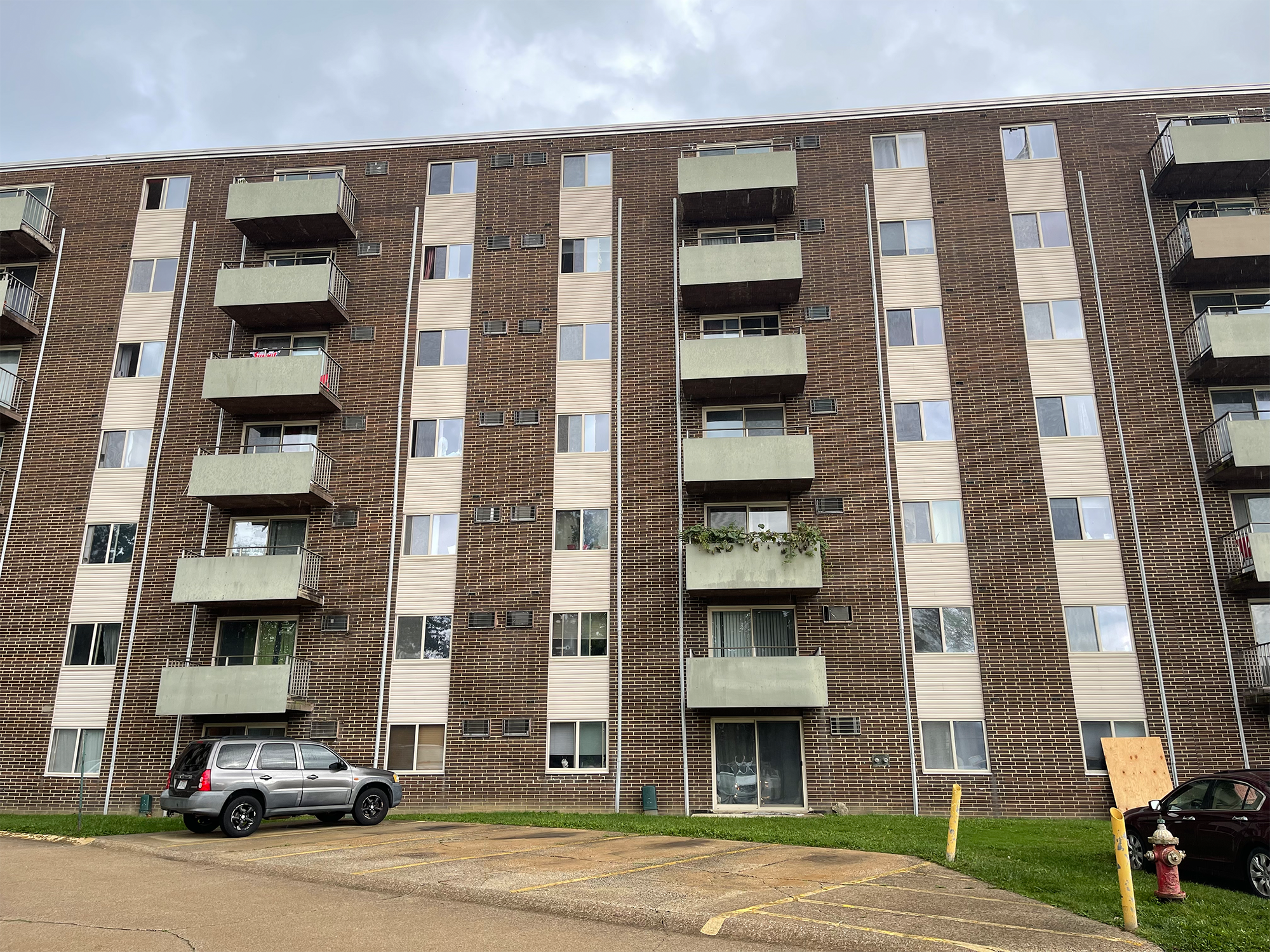 A view of the outside of College Towers from the apartment complex parking lot.

Upon entering the building, you’re greeted with the smell of cigarette smoke and lead. The walls and banisters have chipped paint and cracks running down them.

But you get what you pay for and resident Ben Patterson agrees. He moved into College Towers because the location was conveniently located between Akron and Cleveland. He said the rent was cheap and he liked Kent’s nightlife. 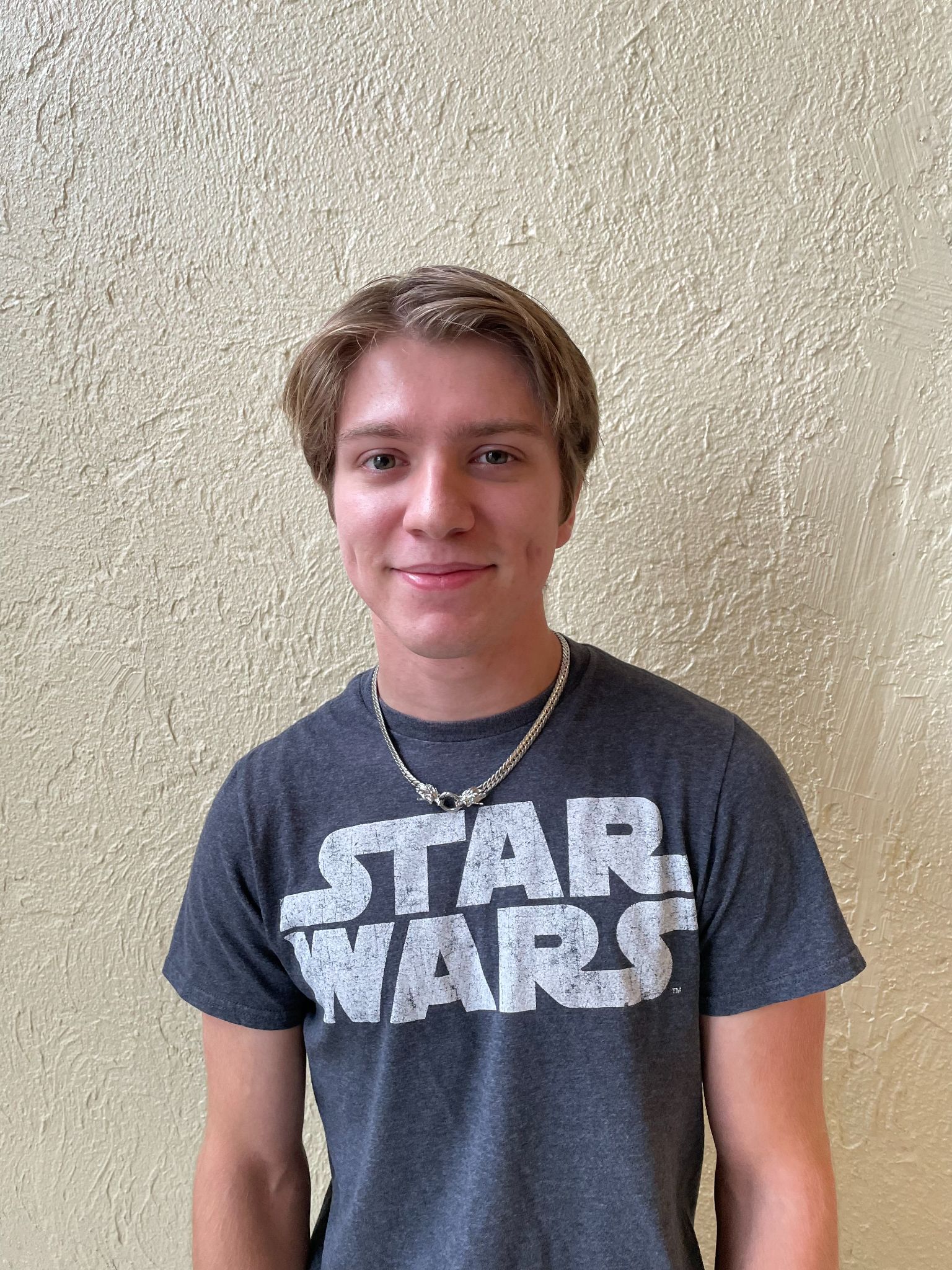 Patterson poses in the lobby of his apartment complex at College Towers.

However, Patterson is worried about the building’s slow elevators and believes the ward’s roads could use construction. 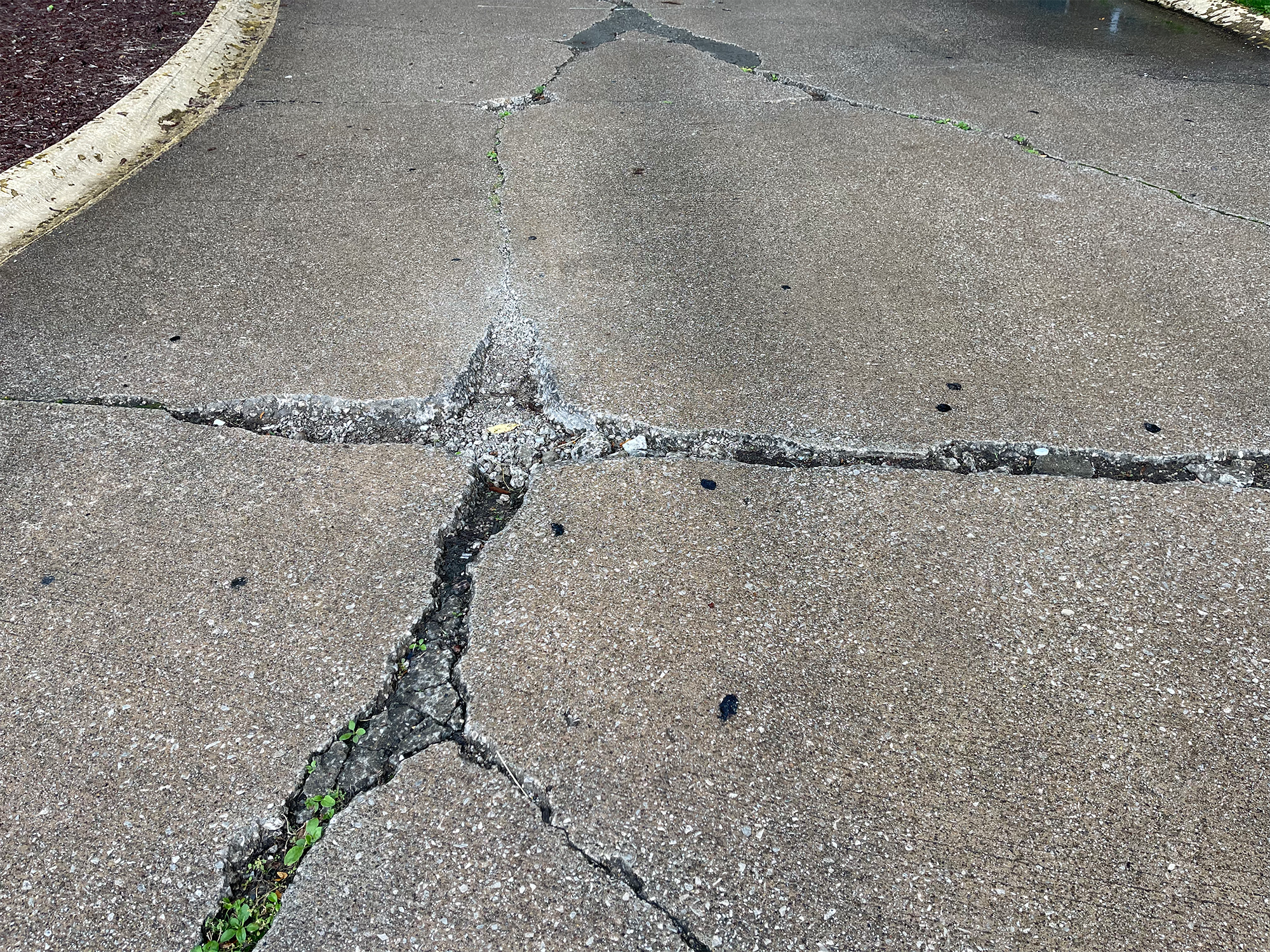 A closer look at the parking lot at College Towers, clearly in need of repair.

“The roads could improve. When I enter or exit some parking lots I [damage] my car. It’s like a big drop,” he said.

Another College Towers resident had some of the same sentiments. Robert Ice said living in that particular building is cheaper than a lot of other places in Kent but it has negative aspects.

Ice said he’s had issues with security, maintenance and management during his time staying in the building.

“When you tell him to fix something, it takes them forever or they temporarily fix it and don’t fix it properly and then [breaks again], he said. … the residents, some of them won’t let strangers in and some of them are homeless and they’re not supposed to be here. It’s a security thing more than anything. Like I had that van sitting outside and somebody up above has been egging my van.”

Ice contacted management after this incident and never got a response. So he decided to take measures into his own hands and purchase a security camera in order to view the parking lot from his balcony.

“I’ve had people here that are in the maintenance department, [steal my wheelchair] … Another time, a group of girls took my chair when I had it latched to the bench, he said. Now they got a camera right over there and the corner. And they couldn’t tell me who tried to take it”.

So it’s safe to say there’s room for improvement at College Towers, possibly something a renovation and change in management can fix.

University Edge is another off-campus apartment building not far from College Towers. Built in 2012, it’s one of the newer apartment complexes in Kent.

Sophomore Keisha Lustin is mostly satisfied with her experience living in ward four.

She enjoys living off-campus and having her own space for the first time while attending Kent State. She likes spending time in Downtown Kent on weekends.

However, Lustin worries about the complexes’ security. “We do have security that goes around at night sometimes, but it doesn’t stop people from attempting to break in or letting random people walk around the buildings,” she said.

Lustin doesn’t like the on and off campus food options. “I don’t know if it’s my health nut side coming out but it’s all fast food. Pulp and Tropical Smoothie, but you really have to be creative if you wanna try to eat healthy here,” she said.

On the opposite side of Summit Street are more student-housing units that reside in ward four. University Townhomes, where juniors Ty Caven and Jake Keaney have lived for the last year and a half. The roommates have enjoyed their time in the townhomes, liking the quiet neighborhood and the atmosphere of the university, but both have their share of wants and desires for this side of Kent. 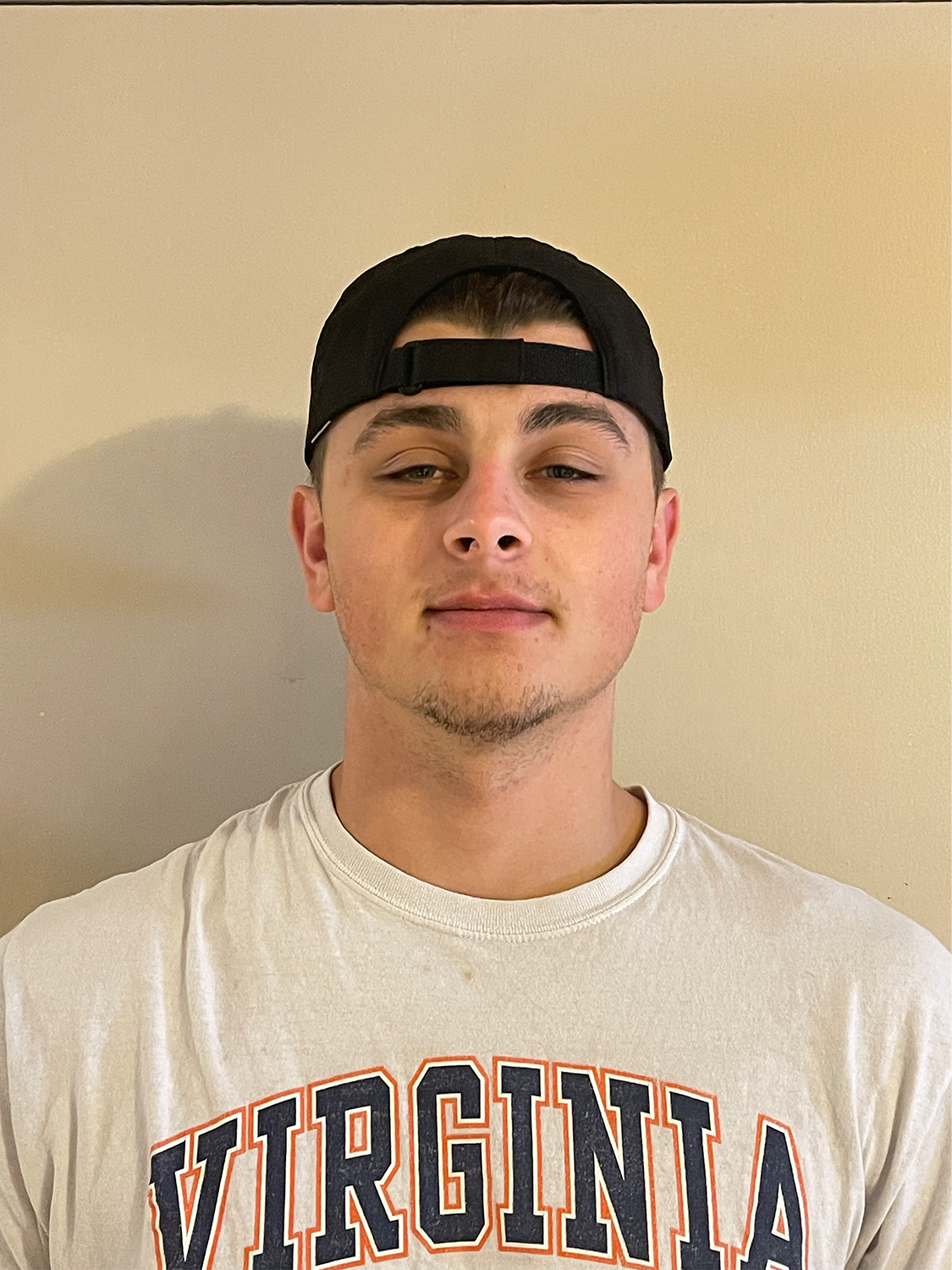 Junior Jake Keaney has lived in ward four for the last year and a half, enjoying the area, but also has his share of concerns.

“I want to see more stuff over here,” Caven said. “More shops, and restaurants, they’re all on the other side of Kent,” Keaney echoed.

Like the residents at College Towers, Caven and Keaney both mentioned the roads when asked what worried them about ward four.

“If I had to say I was worried about anything I would say bad drivers and the roads, they need repaved and redone,” Keaney said.

A common theme amongst many of the residents of ward four: the roads. Many of the roads, both on and off-campus are run down and in need of repairs.