Over the past few years the city of Kent has developed a number of buildings, welcomed new businesses and increased the employment rate.

“Obviously the downtown has been a great success and received a lot of attention,” Kent City Manager Dave Ruller said.

This is all part of the plan for the city of Kent. “We’re equally proud of the success we’ve had in all of our strategic priority areas,” Ruller said. “We have long term strategic goals and we set annual goals to make progress towards our long term goals.” 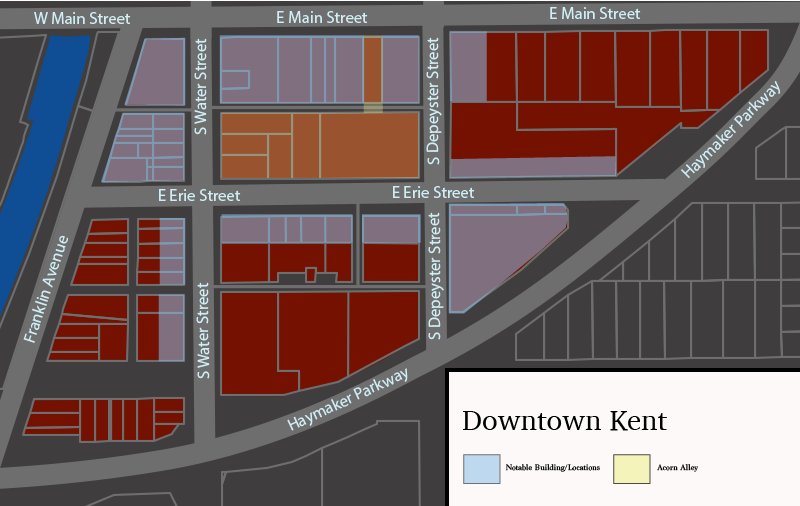 According to Economic Development Director Tom Wilke, the city plans to update its bicentennial plan in the near feature to have a comprehensive plan for the next ten years.

Among the new developments downtown is the new police station that will be finished next month. Wilke said that following the police station, the city will move on to designing a new City Hall.

In regards to new businesses, Ruller mentioned that local attorney John Flynn purchased the former city courthouse on South Water Street and has plans to convert it into a Class A office space for his firm as well as new tenants.

The buildings at the corner of Franklin Ave and Erie Street have been purchased by a local couple who plan to open a Middle Eastern themed restaurant with a bakery and bar. The couple is currently weighing their options between rehabilitating the buildings or razing them and building a new one.

However, not all businesses make it and in cases such as Bar 145, commercial spaces are left open once the business closes and moves out.

“I try to stay in touch with as many businesses as possible and if one is experiencing difficulty, there are resources to help,” Ruller said.

One of those resources is the Small Business Development Center that can offer help with business plans and offer tips on improving efficiency.

When it comes to attracting new businesses the city of Kent offers a number of incentives. Wilke said the city has several Community Redevelopment Areas that offer property tax exemptions for new buildings or expansions on existing buildings. Also, for projects with significant employment increases, the city works in tandem with the state to see if they qualify for a Job Creation Tax Credit.

“Most commercial space in Kent does not stay vacant for long and our landlords typically don’t have difficulty filling empty spaces,” Ruller said.

With all of the economic developments it is no wonder there continues to be job growth in Kent.

“Unemployment has steadily dropped over the past five years and there has been a corresponding increase in our income tax revenue,” Wilke said.

While not all businesses last, Kent does have many thriving businesses that have been around for years…

The question of whether or not Kent is becoming a destination city because of all of the development has been raised.

“Our goal was to make Kent full of great public space that reflects the community’s interesting and eclectic personality,” Ruller said. “We’re off to a great start but we’re always looking for ways to keep it fresh and relevant.”

Right now Kent is spending time to get more art downtown to animate the public space.

“I started the blog in 2007 to provide a way to help people understand Kent’s challenges and our opportunities,” Ruller said.

The blog features anything from city plans and finances to welcoming new businesses.

Ruller has taken time away from the blog the past few months to re-energize but hopes to be back soon.

Is Kent becoming a destination city?https://t.co/lPX33l8Sb0

City of Kent’s plan for Halloween during COVID-19 pandemic

This is an example widget to show how the Left Sidebar looks by default. You can add custom widgets from the widgets screen in the admin. If custom widgets are added then this will be replaced by those widgets.